TrekUnited could not allow 2015 to pass by without a special tribute to Leonard Nimoy in Personal Logs! Our cover feature is the art of Karracaz, whose fan career goes back to the early days of mimeo & offset Trekzines. She has a special affinity for the character of Spock and examples of her work are scattered throughout the issue. We've double the page count with two short stories from Lil Black Dog & KarraCaz, an amazing article from the prolific pen of Jacqueline Lichtenberg as well as short fanfic from Madison Bruffy and Naithom, there's even an audio drama comedy script from the editor. Browse the book on deviantART. 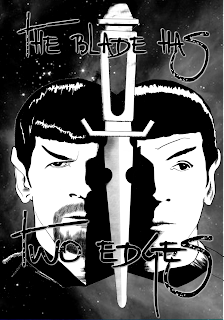 The Night Whispers trilogy draws to a gripping close as diplomatic intrigue threatens to dash Brianna Cantrell's hopes of happiness.

Will she and Spock find a way of satisfying Vulcan tradition and their love for each other? Will she become the pawn of the house Kooli Ton Lok and the power-hungry Sarkal?
324p. 'A' MMP format

Night Whispers 3 : The Confrontation published by Kirok-of-LStok on deviantART

Browse the book on Issuu.

Browse the book on Scribd.

Browse the book on deviantART.

From Quadrant to Quadrant and Person to Person 2

TrekUnited Publishing takes great pleasure in presenting our second adult trek anthology,
From Quadrant to Quadrant and Person to Person 2

Click on the cover above to browse or download this free pdf anthology of Star Trek fan fiction. With close to 400 pages of fiction and artwork, this is another collation of peer acclaimed work that explores relationships and genres from comedy to horror.

The Road Less Travelled by Lil Black Dog
Why did Leonard McCoy become a doctor? He came from a long line of physicians, but it wasn’t always his first career choice, or was it?


Of Mice and Men by Mr. Smith
Jonathan discovers Malcolm’s other secret fear.

Eris and the Age of Steam by Jean-Luc Picard
What happens when a Vorta collides with a Steampunk world? Eris finds herself in a very different place.


Siberians by J.R.Gershen Siegel
On the USS Voyager, A certain anniversary is celebrated.

From Risa with Love by Rush Limborg
Intrigue and romance collide for one Doctor Julian Bashir.

Aftermath by Lil Black Dog
It's never a good sign when the CMO starts seeing things...

Nova Trek: Mirror Image by M. D. Bruffy
There are thousands of realities in the Multi-verse. This is a story about one of them…


Opacity by Pauline Mac
While on Risa, Jon's vacation doesn't go to plan. How does he cope with the aftermath?

Majestic by Angry Fanboy
The Majestic goes where no one has gone before … and never wanted to.


Day of the Dead by J.R.Gershen-Siegel
The worst horrors aren’t found on a movie screen. Trip Tucker finds himself whisked to an unfamiliar time and place during Halloween, the Day of the Dead and All Souls’ Day, 2161.


Artwork - A lot of effort is put into the artwork that goes into each story as well as the ENTAllat's cover. Ranging from photomanipulations to original sketches by Bluetiger to Madison Bruffy's Poser originals, we have tried to capture you, our reader, with a lead into the theme of each tale.

As fans we cannot expect any payment in cash since we don't own the copyrights but as the creators of the works we thrive on your feedback! What did you like? What did we get wrong? What would you like to see? We would love to hear from you! Feel free to comment here, or on our Facebook page.
Posted by Kirok of LStok at 01:20 No comments:

The adventures of the USS Farragut continue with a trio of stories cowritten by Michael D. Garcia and A.J. Gertner: 'Milk Run', 'Eternal Midnight' and 'A Great Perhaps'. The Inspector General's Department is investigating the conduct of the captain and crew of the Farragut so they are pulled off their border patrol duties and given routine jobs. However trouble and ships named Farragut are never far apart!

Go to United Trek, home of this and other quality Star Trek action drama

Tam's first mission aboard the Georgetown could be her last as the crew discovers a world where the natives are frozen in time. Can the crew free them or will they become trapped themselves? This story takes place during the events of Nova Trek: Special Report.
186p US Letter graphic novel
Click on the book cover below
for the free pdf download

Download the book as a pdf paperback for viewing on any platform.

M.D. Bruffy returns with the ninth graphic novel in his epic series, Nova Trek. For Twenty-two years, the fate of the FSS Sundown and her crew has been a mystery. Now, two years into the Second Romulan War, solving that mystery is only part of the story..
186p US Letter graphic novel
Click on the book cover below
for the free pdf download Download the book as a pdf paperback for viewing on any platform.

PD.Smith-Tales of the Fleet 04: Virus

Another new Star Trek fan fiction graphic novel from PD Smith, "Virus", the 4th in his Tales of the Fleet series. Continuing from where he left off in “30 Minutes”, Cpt Osterholt has been kidnapped... or has she been rescued? Who should she fear the most, the Orions or Starfleet Intelligence? Another Mature Adult tale of passion and intrigue. Tales of the Fleet is on a short hiatus whilst Paul focuses on his new Mirror Universe series, however he definitely has plans for continuing this powerful drama.